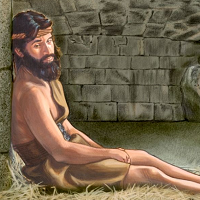 How to repair a faith that has become discouraged.

As I was driving to Bible Study one evening, I asked myself the following question: When is my faith in God most likely to be challenged? What I discovered is that my faith is challenged most often when I see Christians who are sinful, such as hearing about a priest molesting a child, or a pastor embezzling money from a church, or leaders of a church indulging in politics or gossip. Those who proclaim to be Christian, followers of Christ, are sometimes the ones that exhibit the most abhorred behavior. The sinful actions of fellow Christians plays a part in why many people have walked away from their faith. But should we allow the sin of other people to affect our lives in this fashion?

Suppose you say to a friend of yours that you plan to build a small cabin on your property. Your friend, who knows you very well, expresses his faith in your abilities and dedication to build the cabin. So you start to build your cabin and, because of you, several of your neighbors become motivated to build a cabin on their properties as well. But after a few weeks, one of your neighbors burns his cabin down in frustration, the next month another neighbor has only placed a few logs on the ground and stopped working on it, and yet another neighbor completed half their cabin and then tore their cabin down. So your friend, seeing that your neighbors had failed, looks at you and says, “I no longer have faith in you anymore! I don’t think that you’re going to build your cabin either!” Your friend questioned your ability and dedication based on the actions of others. And so we tend to do the same to God. We have faith in God, but sometimes we question God’s existence due to the sinful actions of others. God, and the sinful actions of humans, are two distinct and separate entities; we should never question one based on the other.

But it’s understandable that the constant bombardment of sin around us takes its toll on our faith. Let’s say you’re a passenger on a boat, and the boat hits some rocks and begins to sink, so you jump in the water with your life vest on; the life vest represents your faith. When the water is calm, you are greatly encouraged that you will survive and eventually be saved. But as the days turn into a week or so, you become discouraged, and as the storms in the distance cause waves to grow and pull you under, your discouragement turns into despair. The life vest keeps your head above water, but you feel that you’ll be pulled under and eventually give up.

Our discouragement comes about because we feel we just want to see God’s spirit making a difference in our world, but all we see is sin. We tend to focus more on the sin and less on Jesus. And when all we see is sin, our faith begins to fail like a person floating in the ocean who is not rescued quickly, we allow our faith to turn into discouragement, then into stagnation, then despair sets in; we simply give up. Our mistake is that we do nothing to repair the initial phase of discouragement; we allow our discouragement to fester. In Matthew 11:1-4, we see that John the Baptist was discouraged when he was in prison. John was in a very desperate situation and all he saw was sin and rejection, so he sought out a message from Christ. John’s request was delivered to Christ, and Christ responded by assuring John that He was in the world. John did not allow his discouragement to turn into despair.

And just like John, we also are to seek out Christ’s reassurance that He is with us. By seeking out Christ, this will help us during difficult times because we will know that Christ is in the world and He will find us and rescue us. We have to keep in mind that God is not weak, but we must also acknowledge that God’s spirit is hindered by sinfulness that surrounds us. Is God failing us? No, of course not. Remember, God only works in a willing heart so we must keep our heart open to God. We should not give up on Christ, but instead, seek our reassurance that He is in the world.

The above verse is a very clear and succinct passage. Christ acknowledges that most people will not find the way. Christ is saying we need to remain strong for the long haul.

In another verse, Matthew 24 describes a time of ‘sorrow’ (pain), a troubling time when people will fall away in great numbers. We should find this chapter encouraging, not because we take pleasure in the thought of people being separated by God, but because Jesus foretold of these times; and this passage is meant to build our faith in God because He is in control. And Jesus provides us guidance on how to deal with troubling times. Think of it this way, you are on a football team and your coach says: “The first, second, and third quarters will be difficult for us because they will be stronger and they will be able to make more touchdowns than us (time of pain). However, during the fourth quarter, I assure you that they will weaken and become complacent, and since we are strong and prepared for this time, we will win the game (redemption).” This provides encouragement for us to remain steadfast during the first three quarters, to remain strong and to seek out the fourth quarter. This is what we are to see in the words of Christ as written in Matthew 24.

Yes, discouragement is normal. I see things going on around me and it makes me ashamed such as: physical abuse, violence, sickness, complacent church, betrayal, drug addiction, sexual immorality; all these things make me want to crawl in a hole until Christ comes back. But then I remind myself that this was foretold and it energizes me to keep making steps.  We should not look for God to develop a heaven here on earth; this thought is understandable and admirable, especially in our world today. I too wish this would happen. But we are not to impose our will on God’s plan. We aren’t to desire heaven to be developed in the place we live now because this place is unclean with sin. The place we desire is only going to take place after Christ returns and all sin is removed; the fourth quarter. This is the new heaven and new earth and it will happen “in a twinkling of an eye”.

And finally, we are to find encouragement in the following verse: “…In the world you will have tribulation; but be of good cheer, I have overcome the world.” –John 16:33

The time has already been won, and we are near the fourth quarter, we will be rescued! Be of good cheer!

2 thoughts on “Remaining Strong in Faith”